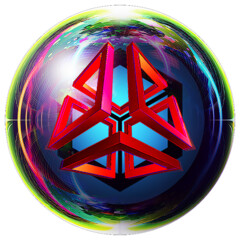 George Hoeylaerts a.k.a. Natural Warp was born in 1976 in the Flemish countryside and grew up between the chilled out meadows and fields of Belgium. He started studying the arts from the age of 9 and stayed on track ever since. Sprouted from the easy going pre-computer age and growing straight into our highly animated XR virtual world has led him throughout a wide variety of old school methods & new school art techniques.

Graduated in the year 2000 in both the visual arts and graphic design he settled in his first studio and continued painting with oil and acryl, making sculptures, experimenting with paintbrush, photography, constructing installations and much much more ... and of course occasionally showing his work in group- and solo exhibitions and on festivals and events down the road.

Besides creating for the sake of art he explored even further the broad artist's spectrum and worked as special FX painter for several companies, as decor and light artist for theather and events, as video technician and director for live events of an on the road radioshow and the making of decor for TV series, movies and festivals . This way he kept himself submerged in the world of visualization while constantly filling his backpack with a variety of practical insights.

One day after deciphering and following up on the advice coming from an overwhelmingly colorful being in one of his dreams his line of work totally changed, took off and has since then been traveling throughout many european festivals and events - reaching to Japan, South Africa and the US.

At this very moment he is still focused on deeper exploring and further purging of his visionary path while using a mixture of new-born methods expanding his range with these digital tools. His latest exhibitions thereby included a stunning panorama of digital art prints enhanced by vivid layers of augmented reality and video projections which made a smooth transition to his 360° VR art installation.

Mind-expanding visions and offering a glimpse behind the increasingly becoming transparent veil form the common thread in his visually abstract storytelling. George could ramble on for hours about being inspired by many great path clearing dreamers, visionaries and philosophers, pioneers and shamans , writers musicians and artists who all used the same tools to connect the dots in this mystical world.

His works are an attempt to translate these culture-bridging and world-unifying psychedelic experiences into a recognizable and soul-touching clear visual language. And thus with not only the goal to inspire spine chilling awe but to go beyond and pierce through the self generated mirrorworld and connect straight to the source.